Fritzing was started in August 2007 by the Interaction Design Lab at the University of Applied Sciences Potsdam , Germany. From 2009, the team has been hosted by IXDS and the non-profit foundation Friends-of-Fritzing e.V. was established in 2012.

...and many other contributors

Fritzing is a research project that was made possible through long-term funding (2007-2009) from MWFK Brandenburg (Ministry of Science, Research and Culture in the state of Brandenburg), based on a grant application by Prof. Reto Wettach.
Further support was provided through the Faculty of Media at Bauhaus-University Weimar, and through IXDS.

Thanks to an anonymous supporter, who is helping to make hardware become software.
Thanks to corporate donors PICAXE, Parallax, SparkFun, Arduino and Adafruit.

If you would also like to support us, please get in touch! 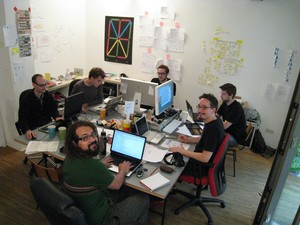 A photo of some of our team members in the previous office. We were very cozy.